Skip to content
This Wrangler vs. Bronco Crash Test Is Eye-Opening 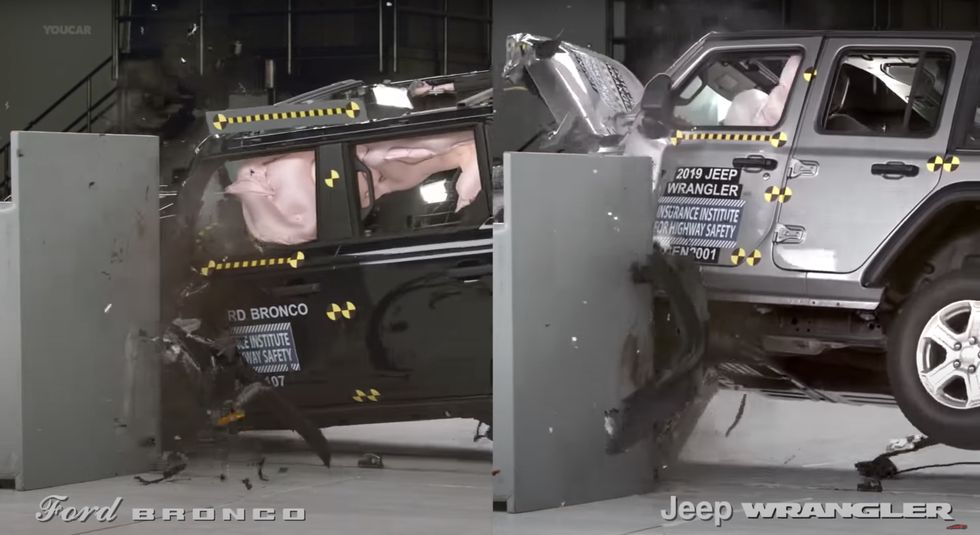 This Wrangler vs. Bronco Crash Test Is Eye-Opening

With the revival of the Ford Bronco, the Jeep Wrangler is faced with a genuine hometown rival for the first time in more than a quarter-century. And while plenty of folks are happy to debate the merit of the two SUVs’ off-road capability, a recent upload to the YouCar YouTube channel might help you decide which truck belongs in your garage. That’s because we now have a chance to better see how the two off-roaders compare when faced with the IIHS’s most difficult crash test: the small overlap front impact. Spoiler alert: Things don’t look great for the ole seven-bar grille.

The small overlap front impact test is the most brutal task that a car undertakes during crash testing. It consists of accelerating a vehicle up to 40 mph before smashing at least 25 percent of the frontal area into a five-foot-tall barrier. The area that makes impact must be biased towards the driver’s side, which helps simulate hitting another vehicle, or an object like a telephone pole. As the IIHS has previously reported, the Ford Bronco received a Good rating for its efforts in this area, whereas the Wrangler pulled away with only a Marginal score. And while that might not seem like a tremendous difference, the footage speaks for itself.