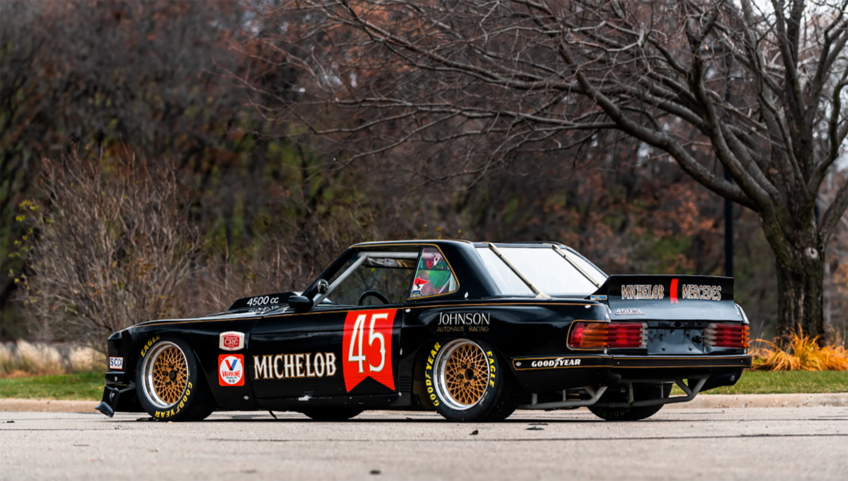 It’s 1982 and you’re tuned-in to the Trans-Am race series, gawking over a grid packed with competitors all vying for a chance to take home the win and the manufacturer versus manufacturer bragging rights that come with it. Within that lineup of highly recognizable domestic muscle, your eyes are pulled to a unique coupe dressed in black with a three-pointed star emblem shining in its front grill.

This Mercedes-Benz 450 SL was built from the ground-up in 1982 specifically for the Trans-Am series and was a project commissioned by Neat DeAtley, a Mercedes-Benz dealership owner with the wild idea of promoting the brand’s performance image through the formerly strictly domestic series. For the last 30 years the car has remained under the ownership of a close friend to DeAtley in Minnesota, and it’s up for grabs through Mecum Auctions right now.

What began in 1966 as the Trans American Sedan Championship was restructured under the SCCA’s fastest production car classes in 1975. By 1980, a handicapping system to level the playing field came into play based on engine-size-to-weight ratios. In addition, tube frame chassis cars came into play and became the standard. This ’82 SL uses the same sort of monkey bars underneath its Mercedes paneling to look the part. In fact, the only factory Mercedes parts on the car’s exterior are the OEM taillights and trunk emblem—everything else is custom formed in fiberglass in silhouette racer tradition.